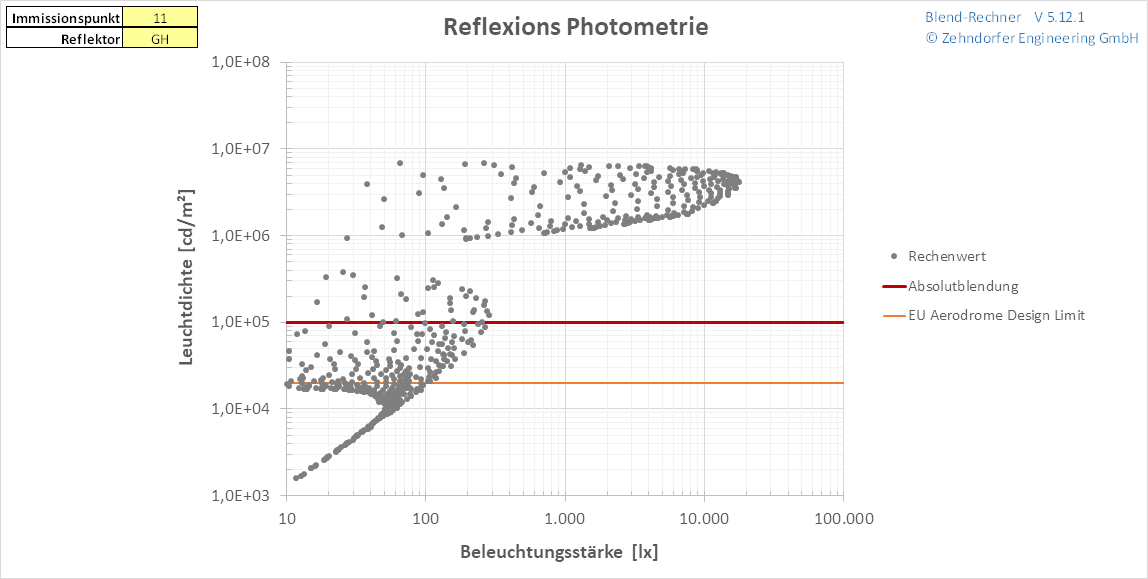 Solar Glare Assessments are often required as expert input in building permitting submissions of solar power plants or glass facades, especially when glint and glare in the direction of the neighbourhood or road traffic cannot be ruled out. Guidelines in different countries allow the assessment of solar reflections. On one hand, they rely on the duration of the glare (during a day and during a full year) as criterion of assessment. On the other hand, the strength of the reflection can play an important role in the perception of the glare.

Luminance is a measure of luminous intensity per area. As an example, think of LEDs, which despite their small surface of a few mm² have a high intensity - typically this results in a very high luminance. If all the light is coming from the same direction (small spatial angle), luminance will be very high. 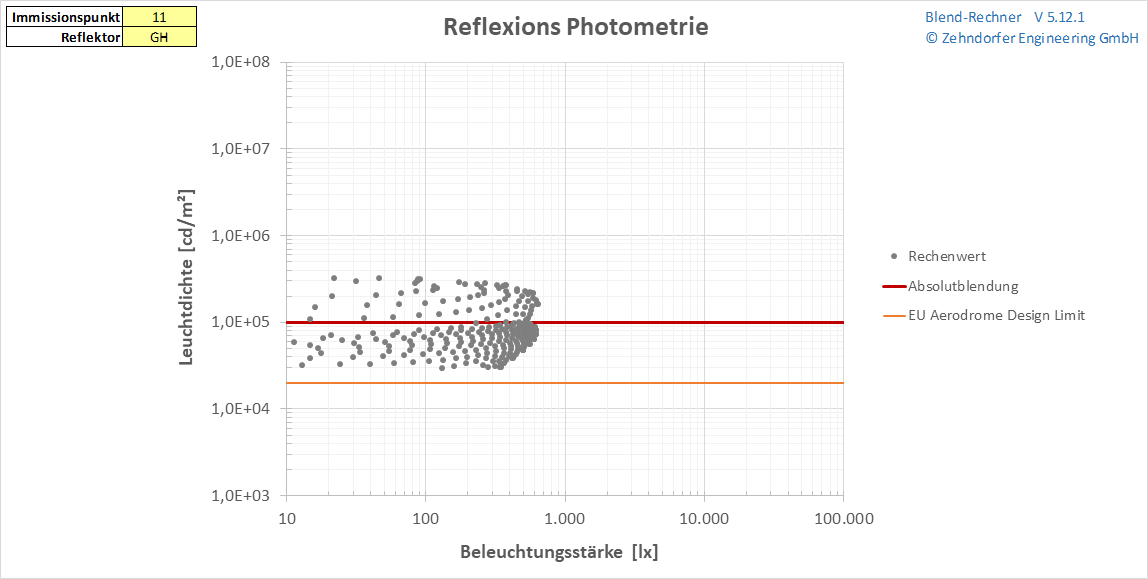 The Luminance as well as the Illumination play a decisive role in international guidlines for the valuation of lighting systems (e.g. illumination of workspaces or floodlights for sport arenas). On one hand sufficient illumination is needed, on the other hand direct dazzling from luminaires should be avoided. The guidelines for the reflections of the sun (e.g. the one from France or the European Guideline for Airport Design) define a maximum Luminance for the reasonableness of glint and glare. However also Germany, Austria and Switzerland mention Luminance with regard to Absolute Glare (100.000 cd/m², the value at which eye ceases to protect itself).

Physical parameters (e.g. noise level) are often depicted on a logarithmic scale when rated by human perception. Light engineering data also follow this scale, which is why in the photometric diagram the luminance and the illumination are each shown on a logarithmic scale, following the common logarithm with base 10. A value of 1.0E+05 stands for 10 to the power of 5, i.e. 100,000 cd/m². The diagram also shows the limit for absolute glare (100,000 cd/m²) as well as threshold from the European Aerodrome Design Guideline (20,000 cd/m²).The image on the right shows the reduced luminance of a special glass (at the same point of interest compared to the picture above)

The point-cloud in the graph on the right consists of many points in time. Each point represents a period of 5 minutes duration, causing reflection towards a certain immission point. Depending on the sun position and the angle-dependent reflection factor, the strength of reflections can be calculated. Due to the fact, that the reflected sun-disk might exceed the boundaries of the reflector, the actual reflecting area has an impact on the illumination at the immission point.

The advantage of the simulation method described above, is the possibility to calculate the impact of glare-reduced glasses. While normally only geometric calculations of the reflections are executed (exit angle = angle of incidence), this new method allows to calculate the intensity of reflections (depending on the strength and angle of incidence of the sun). Glasses with anti-reflective coatings or satinised (etched) glass typically show less reflections. This means that glare duration can be limited to the periods where a certain threshold of reflected luminance exists.

Read more information with respect to Solar Glare Assessments here. You will find additional information on the simulation and representation of reflections on our homepage.