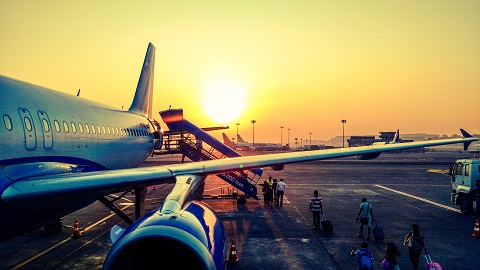 Dubai International Airport (DXB) - with its 90 million passengers per year is one of the busiest airports of the world. The home of Emirates Airlines also hosts the first purpose-built Airbus-A380-Terminal. Being the largest airport in the Middle East, it conveys 51% of the gegions passenger traffic. Its 90,000 employees contribute 27% to Dubai's GDP.

It's no secret, that Dubai's energy consumption per capita ranges among the highest on the planet. On one hand, this is caused by extremely low energy prices (by means of rich oil and gas wells in the region) - on the other hand, energy demand is driven by cooling and salt water desalination. This makes the several Solar Projects, Dubai has been implementing in the recent past and which are among the largest of the world, all the more important. With the help of these projects, Dubai aims to fill 25% of total energy demand in 2030 from renewable sources, a target established by Dubai's Clean Energy Strategy.

Dubai International Airport has started a few Green Initiatives, too. Among these are Energy Efficiency Measures, Electrical Vehicles, as well as the planned 5MWp Photovoltaic Roof-Top Plant on the airport's Terminal 2, as Construction Week has reported. This largest solar power plant on an airport in the Middle East, with 15,000 PV-panels, shall produce 7,400MWh per year; it is a joint project with Etihad Energy Services Company.

Dubai Airport Terminal 2, which has been around since 1998, is currently undergoing renovation and expansion, having its capacity doubled. The flat roof of the Terminal with its size of 63,000m² is an ideal location for a PV-plant. On one hand, the un-shaded area offers a lot of space for a PV-park under Dubai's sun. On the other hand, the generated electricity will be consumed in the terminal building directly beneath, which short cable connections will result in very high efficiency. While other utility-size power plants need expensive transformers and long transmission cables to feed-in electricity, this particular PV-plant can be connected directly to the main distribution board of the building below.

Due to heavy traffic at the airport, pilots and air traffic controllers must not make any mistake. Reflections of glass surfaces could blind airport personnel at the tower. Since they have to be able to view the runways, rollways and approach sectors any time and without obstruction, reflections from PV-panels could pose a glaring hazard. In the case an air traffic controller has no visual contact to the airplanes, he has to rely completely on radar-based instruments and therefore needs to increase the distances of starting and landing airplanes, to provide additional safety. This increase in distances costs the airport valuable time - the capacity of its runways is reduced.

During take-off and landing, pilots must devote their full attention to the instruments and the immediate environment. Glaring hazards could divert pilots' concentration or impair the recognition of points of interest on the ground. This is why especially in the approach sector and on the tower, glint and glare has to be avoided. Large glass surfaces, like those of the 15,000 PV-panels, however, could cause glaring - as experienced on Manchester Airport in the USA, where a newly installed PV-plant had to be removed shortly after inauguration.

This is why Zehndorfer Engineering was commissioned to execute a Solar Glare Assessment for the planned PV installation. The company had finished very similar Glare Studies for Vienna Airport and Munich Airport before. These verifications had helped to avoid pending Glare Hazards for the air traffic control tower and pilots. In the case of dangerous reflections, the angle of the PV-panels could be adapted, as already shown on several similar installations. During planning phase, this exercise does not increase costs, in contrast to Manchester Airport, where glaring had only been recognized after construction.

During the Glare Calculation on Dubai Airport the sun position from sunrise to sunset over the period of a whole year has been used as basis for the simulation of reflections. The PV panels with two different slopes are reflecting the sun at different times. Points of interest in the approach sectors and the tower have been investigated in the assessment. Besides the timing and the duration of potential reflections the Solar Glare Assessment reports the viewing angles and the strength of glares. This allows an assessment of the risk and danger of reflections for air traffic and air traffic controllers. The evaluation is based on the European Guidelines of Aerodrome Design, as well as the relevant FAA guideline.

In this particular case at Dubai Airport, the glaring hazard towards the neighboring buildings of the police headquarter and the Dubai Free Trade Authority (DAFZA) had to be evaluated. Despite the large-size PV-plant all potential Glaring Hazards could be cleared. Reflections of the PV-panels will not hit any of the points of interest under investigation and therefore do not pose a threat to air traffic or any unreasonable nuisance to the neighboring buildings.