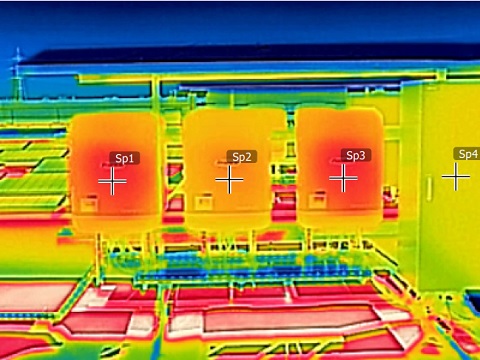 An Infrared-Camera is an important tool of every PV-Expert. It can register and visualize deviations of a few hundreds of degrees. Modern infrared cameras not only record a thermal image, but will take a photographic image at the same time. This allows for later attribution of thermal images to devices, cables etc. Another impressive feature is the superimposing of thermal and optical images, so that objects' boundaries and labelling remain visible.

A damaged photovoltaic cell does not generate the same current, as a fully functional one. At the same time, by increasing its resistance, it also reduces the electric current of the other cells (which are connected serially). That way the solar cell, typically a generator of electric energy, becomes a consumer of energy (even when the sun is shining). This consumed energy is converted to heat and radiated - a thermal radiation that can be visualized with the help of an IR-camera. This allows to recognize faulty solar cells, which otherwise have a normal appearance.

Why do PV-cells heat up?

When PV panels don't produce the nominal power, this can be caused by different failures. Damaging of PV-cells almost always results in reduced electrical power output. The following failures can be detected with the help of thermal imaging. 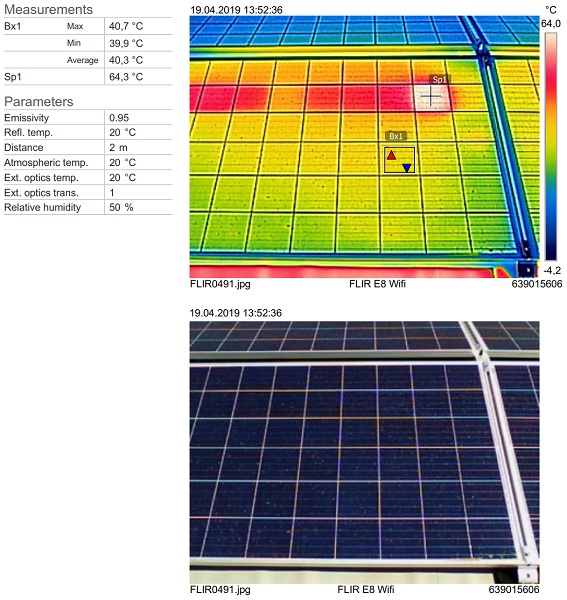 Hot-Spots - the local heating of a PV cell. This can be caused by manufacturing failures (e.g. failures in doping or damages in the crystal grid of the cell) or delamination of conductors from the cell surface or cracks in cells or wires. The affected cells will consequently show a significantly higher temperature, than the rest of the PV-panel. Due to rapid aging under higher temperatures, the encapsulation material as well as the backsheet of the PV panels can change its colour to brown or yellow. Hotspots reduce the power of the whole PV-string, because they limit the maximum current in the whole string. The voltage of the PV-panel can be reduced by a hotspot, too. In extreme cases, hotspots can also lead to burning of the plastic materials in a PV-panel. An infrared camera allows for quick and easy discovery of hotspots.

Cell breakage - A PV-panel typically consists of 60 solar cells, which are electrically connected in series. If one of the cells fails, the power of the total PV panel will be reduced. Solar cells are extremely thin (approximately 0.2 mm). They are made from silicon, which has similar mechanical properties as glass. They are liable to break due to many different reasons like manufacturing faults during cell- or PV-panel production, transport damage, assembly failures, but also external reasons such hail as well as extreme wind- or snow conditions. Walking on the PV-panels also poses a threat for the PV cells. Even if the PV panel glass does not break, the bending of the glass can still cause the encapsulated PV cells to break. These cracks are not easily recognizable with the bare eye, due to the fact that the edges of the crack are typically so close to each other, that no contrast line can be observed. Cell breakage reduces the conductivity of conductors, crossing the crack or might even cut them off completely, causing the broken cell part to drop out. The loss of parts of the cell makes the remaining cell area to conduct a higher current density, which will lead to a raise in temperature. This difference in heat can be visualized with an IR-camera.

PID Potential Induced Degradation - PID is an electro-chemical process, during which the electrical charge of the solar cell is influenced by foreign atoms. These atoms (typically Sodium, Na+ ions) migrate out of the PV-panel's glass, through the encapsulation layer, in the direction of the cell and accumulate on the cell surface. This process is triggered by high voltages (up to 1000 V), as well as higher temperatures, under which Na+ ions can move faster. Humidity also promotes the PID-effect, because it can form a moist film on the glass surface, which strengthens the electric field and thus supports sodium migration. Cells with a PID problem are electrically inverted on their surface, causing them to lose their photo-electric properties and to turn into a mere electric resistor. The power loss over this resistor can be visualized with a thermal camera. Typically, the cells on the PV panel edges are affected more, thus causing the corresponding pattern (hot ring). 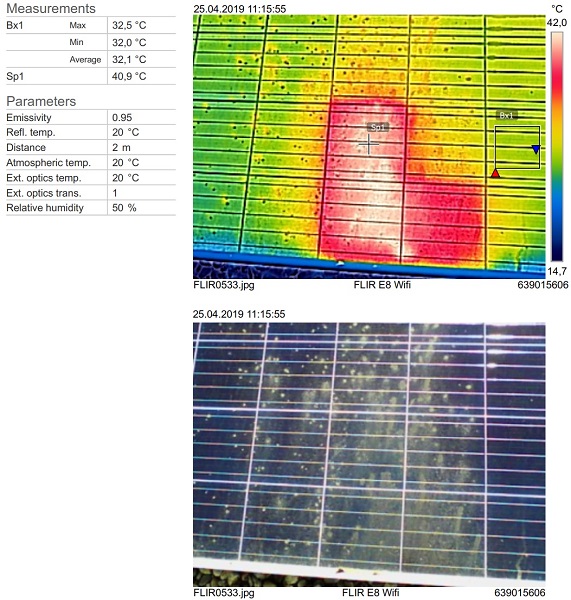 Soiling - Dirt and discoloration on a PV-panel can reduce the power of the PV cells. Internal sources of soiling are manufacturing failures, enclosure of foreign parts, as well as discoloration of even delamination of the EVA-foil - the encapsulation layer that keeps the cells and PV panel together. External soiling mostly consists of algae, tree leaves, bird droppings, or soot particles, which are most notably accumulated on the lower rim of the PV glass, just before the frame of the panel. This layer of dirt can be removed once a year, depending on its intensity. Caution needs to be applied when cleaning the PV panels, in order not to mechanically or chemically damage the glass and any anti-reflective coatings. 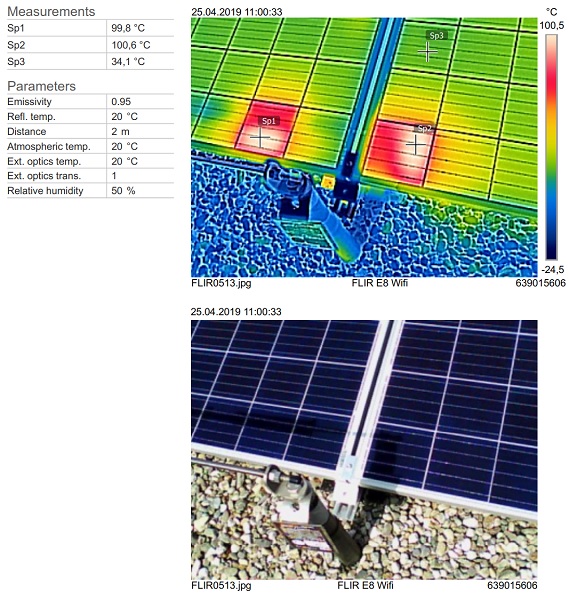 Shading - Shaded PV cells only conduct a smaller electric current, than cells that are directly exposed to the sun. Since the total current, driven by the other PV panels in the string, remains almost the same, the current density in the non-shaded cell area increases. The resulting increase in power losses is emitted as heat radiation, causing shaded cells to show temperature increases of a tens of degrees. Infrared cameras can indicate these temperature differences very clearly. 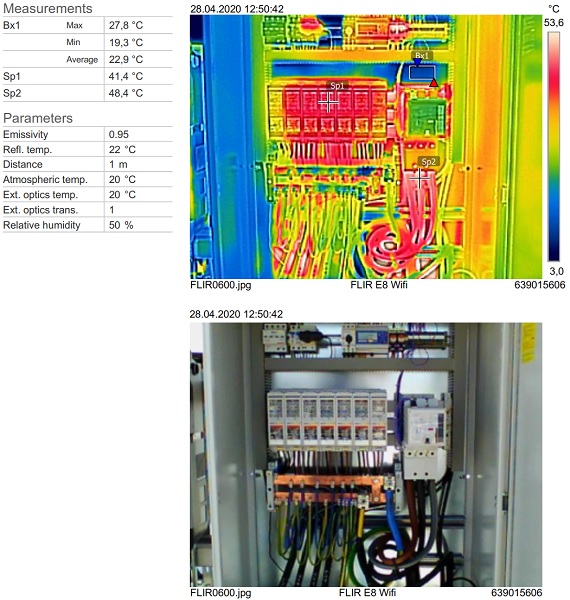 Electrical parts, other than PV-panels, can be inspected with a thermal camera, too. In addition to the lawfully required Recurring Electrical Verification, a thermal image can quickly provide an indication of potential failures such as electrical overload of cables, fuses or switch gear, loose electrical clamps or high-ohmic electrical junctions, heat accumulation in electrical cabinets or uneven distribution of currents in parallel cables. Infrared measurements are not required by standards and norms, however, due to their fast and easy evaluation they allow the early recognition of fire hazards. This can be especially useful in explosion protected rooms or for older electrical installations.