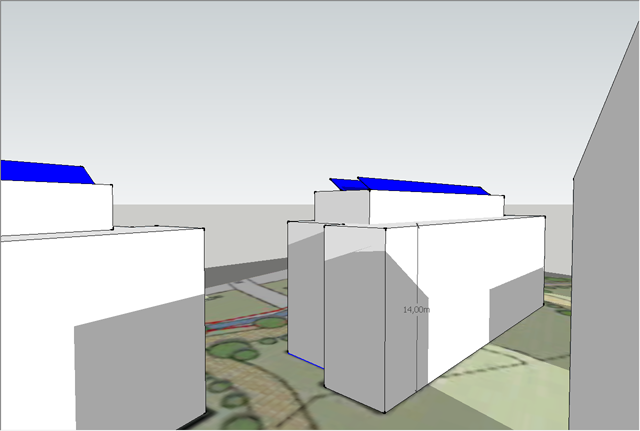 September 2016 - Zehndorfer Engineering finalizes a Solar Glare Assessment for several Solar-Thermal Plants situated on a building compound to be constructed in Villach / Austria. The installations are distributed on several roofs and meant to contribute to the hot water generation in the flats below. The survey was ordered by the Villach City Government in an administrative assitance procedure. The solar installations, to be built on several newly planned buildings, triggered concerns about glint and glare with regard to the residents of neighboring buildings as well as the road nearby.

Solar-Thermal plants differ from photovoltaic plants in several ways. The solar panels can have a much larger area, caused by the focus on thermic radiation other surface structures and anti-reflective-coatings can be applied, the elevation of the mounting structure is generally steeper sloped and the way of fixing the panels can lead to small deformations of the glass which can cause optical effects. At the end of the day solar-thermal panels also have more or less structured glass surfaces, which reflect or scatter part of the sunlight.

The Glint and Glare Calculation indeed showed a glaring hazard of some of the installations, which could be abated almost completely by reducing the elevation of the solar collector panels, thus not causing any additional costs. Glaring in the direction of the closely located street was found to be negligible.